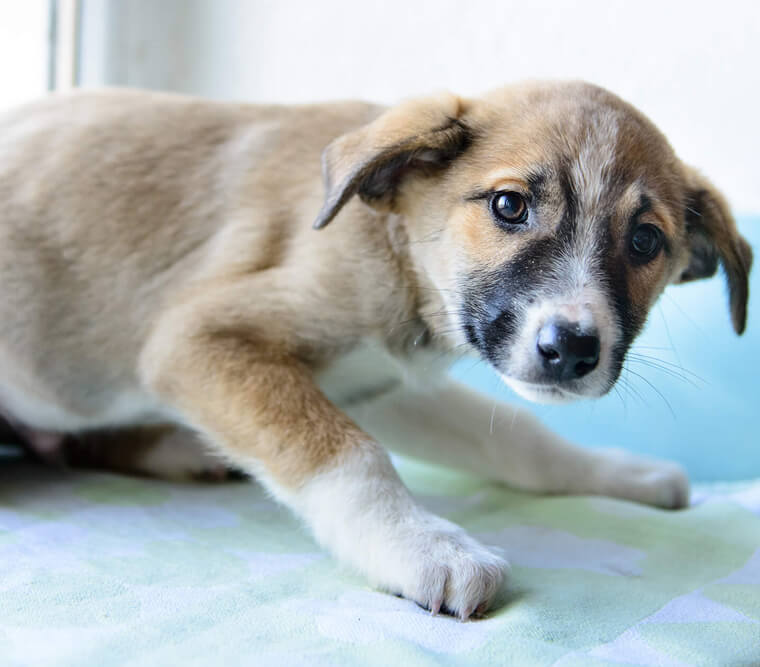 While nursing, the mother emits pheromones that bond them with their pups. Pheromones are hormones emitted by all mammals, including humans, that are airborne and typically imperceptible to human beings. For more about how they work, please see an article published by the Smithsonian Institute, “The Truth About Pheromones.”

Adaptil and Comfort Zone are DAP brands. The diffuser plugs into the wall and emits the pheromone continuously while it’s plugged in and filled. There’s also a spray that can be applied to a dog’s bed or toys, a blanket you take with you in the car, on trips, etc. The effects are real, and can range subtle to obvious, upon introduction. Most people really notice a difference after they run out or stop using it, and previously unwanted behaviors return or increase.

I highly recommend using it daily for a minimum of 3 months, before deciding whether it is or isn’t helping.

Appropriate music or other “white noise” reduces reactivity (barking), and physiologically calms dogs. Numerous studies have demonstrated the RIGHT music can have a soothing affect on mammals in confinement.

“Instrumentation and tempo of music can produce marked differences in results. Solo instruments, slower tempos, and less complex arrangements had a greater calming effect than faster selections with more complex harmonic and orchestral content… Results showed 70% of anxiety behaviors were reduced with psychoacoustically designed music, while 36% of anxiety behaviors were reduced with the non-psychoacoustic control CD… It appears that psychoacoustically designed music, with slower tempo and simpler arrangements and sounds, is more effective in reducing anxiety.” Source: http://throughadogsear.com/research/

Regularly play the “psychoacoustic” music when you’re home, so your dog doesn’t associate it with being alone. It should be loud enough to drown out typical street noise.
Music Sources

Cable and satellite providers with digital music channels offer a version of spa/new age/environmental music that’s perfect for this application, and usually included in the cost of a package. Digital channels play continuously, no commercials, no announcers, and no shifts in programming.
Westside digital music channels, as of March, 2015:
Direct TV “New Age” #856
Fios “Soundscapes” #1842
Time Warner Cable “Soundscapes” #943

A series of CDs/mp3s were created based on these results, entitled “Through A Dog’s Ear.”  They offer music samples on the website. It’s all piano-based, slow, steady tempo. No voices, as recommended by research.

Thundershirt – Compression can relieve stress and promote calm and quiet, in anxious dogs, humans, and other mammals (Temple Grandin’s Hug Machine documents this). The Thundershirt uses constant, subtle pressure along the entire torso to help dogs feel secure, and relieve anxiety. While it can be used in many applications, most dogs need to be conditioned to the experience of wearing the Thundershirt while they’re calm, before using it to affect their “triggers.”

I advise conditioning the dog to the benefits of the shirt while you’re home relaxing, when there are no outside distractions or looming deadlines. Begin with a few seconds of wear, then remove. Increase wear time a minute at a time, up to 5 minutes, then in 5, 10, or 15 minute increments, until the dog can ignore the device while wearing it for an hour or more.

Studies have also shown that “Dogs spent more time resting and less time moving upon exposure to lavender and chamomile than any of the other olfactory stimuli. These odorants also encouraged less vocalization than other types of aroma… It is suggested that the welfare of sheltered dogs may be enhanced through exposure to appropriate forms of olfactory stimulation. Lavender and chamomile appear particularly beneficial.